Investigator of the Year

2019 NCIAAI INVESTIGATORS OF THE YEAR

On November 26, 2017 the Forsyth County Fire Department investigated a house fire that occurred in the early morning hours, destroying the home and killing two of the family’s beloved pet canines. The fire was ruled incendiary, but due to lack of leads and changes in employees the case grew cold. On January 20, 2018 at the same location, multiple buildings were set on fire. After returning from an extended long term absence, Anthony Stewart an Assistant Fire Marshal with Forsyth County Fire and James Rae a Detective with the Forsyth County Sheriff’s Office, were assigned as the case investigators.

Evidence was obtained during the processing of the fire scene, and leads were developed in the case. As a result of true detective work, surveillance footage was obtained after an exhaustive search of local stores one by one. Once a suspect was identified, a confession was obtained to purposely setting all of the fires and the intentionally murdering of the family’s pet canines. Subsequently on September 27, 2018 the suspect plead guilty to one count of Felony 2nd Degree Arson, two counts of Felony Animal Cruelty, two counts of Felony Burning Certain Buildings and one count of Felony Burning of Personal Property.

The suspect was sentenced and received the following as a result of the investigation:

This was a difficult case to work due to different Investigators picking up a cold case. However, great team work was shown and a guilty verdict was obtained. 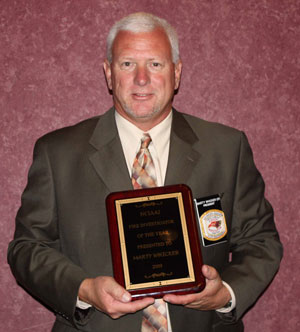 Pictured above is Marty Whicker with the 2009 NCIAAI Investigator of the Year plaque. Marty Whicker has been employed with Forsyth County Fire Department since January 1984. Marty has worked his way through the ranks of the Forsyth County Fire Department to his current position, serving as an Assistant Fire Marshal since September of 1987. Marty is now the primary fire investigator for the department. Marty has been successful in the arrest and prosecution of several major fire incidents in Forsyth County including a 30 million dollar warehouse fire, two First Degree Arson & Murder Investigations, along with numerous juvenile related fires.

A recent note worthy case that Marty has been involved, was working with investigators from the Forsyth County Sheriff’s Department on a two month investigation of over 45 incidents that included malicious use of explosives to damage property, burning of personal property, breaking entering and larcenies to churches, businesses, schools, vehicles, and vandalisms. This investigation resulted in the arrest of 6 individuals with a total of 59 Felonies, and 76 Misdemeanor charges.

Marty has severed in various positions with the NCIAAI, to inlcude President in 2009.

Marty Whicker is a valuable asset to the Forsyth County Fire Department and the NCIAAI with his hard and dedicated work to help in the reduction of arson related crimes.

2008 NCIAAI INVESTIGATIVE TEAM OF THE YEAR 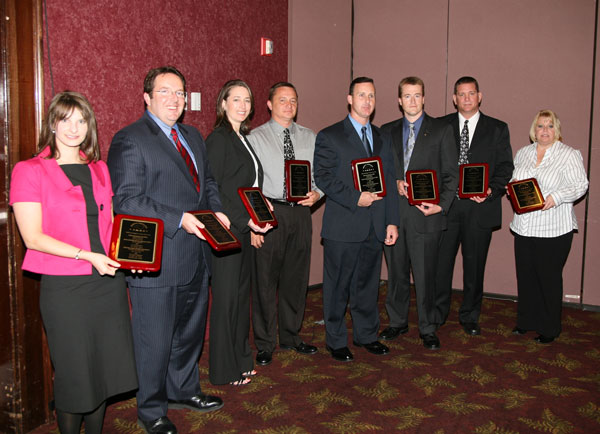 On January 10, 2006, tragedy struck the town of Midland, N.C.  A residential fire had claimed the lives of two children, Daniel Macemore (10 yrs old) and Addison “Addie” Macemore (8 yrs old).  The mother, Lisa Greene, said it was an accident, caused by a candle that had been left burning in the children’s bedroom and must have tipped over and caught a blanket on fire.

The Cabarrus County Sheriff’s Departmentt began a criminal investigation into the mother’s story. The NC SBI became involved with determining the origin and cause of the fire. The Cabarrus County District Attorney’s office was immediately contact and became involved in the investigation. The Bureau of ATF was requested to assist with fire modeling in an attempt to determine a possible time line for the fire and fire progression based on the evidence at the scene. That request subsequently turned into full scale testing at the ATF’s Fire Research Laboratory located in Beltsville, Maryland.

The recipients’ of the 2008 NC IAAI Investigators of the Year Award, put in many long hours during the investigative process and the later criminal prosecution. Due to the hard work of these individuals, the criminal trial against Lisa Greene began in October 2007 and lasted till the late January 2008.  The NC Attorney General’s office assisted the Cabarrus County District Attorney’s office in the prosecution. This investigation and prosecution received regional and national media coverage. On January 30, 2008, thanks to the hard work, dedication and professionalism of the prosecution’s unified team, a jury found Lisa Louise Greene guilty of intentionally setting the fire that killed her two children. Ms. Greene was sentenced to two (2) consecutive life terms without the possibility of parole.

Pictured is NCIAAI President Joseph M. Rorie, Jr. [orange shirt] presenting the NCIAAI 2007 Investigator of the Year Award to Craig Yarborough. The award was presented to Mr. Yarborough at the annual NC/SC IAAI Joint Training Seminar Banquet in Myrtle Beach, SC on October 24, 2007. My Yarborough is retired from the Burlington Fire Department and serves on various NCIAAI committees.

Pictured above is Darryl Carter of Eden Fire Department receiving the 2006 NCIAAI Investigator of the Year Award from Eden Fire Chief Doug Cline. The award was presented to Mr. Carter at the annual NC/SC IAAI Joint Training Seminar Banquet in Myrtle Beach, SC on October 18, 2006. Mr. Carter has since retired from the Eden Fire Department and now serves on the City of Eden Council representing Ward 5.

Mr. Carter was the founding member of the Rockingham County Arson Task Force and started the Investigative Strike Team in Eden, NC. He has supervised many complex fire investigators in his career, which resulted in numerous arrests. Mr. Carter received his NC State Fire and Rescue Commission, Certified Fire Investigator Certificate in 2000.

2005 NCIAAI INVESTIGATOR OF THE YEAR
Patrick A. Whatley

Pictured above is Marty Whicker, NCIAAI Scholarship Committee and the 2005 NCIAAI Investigator of the Year, Special Agent Patrick A. Whatley. Mr. Whatley was presented this award at the NC/SC IAAI Joint Training Seminar Banquet on October 20, 2005. Mr. Whatley is employed with the North Carolina State Bureau of Investigation.